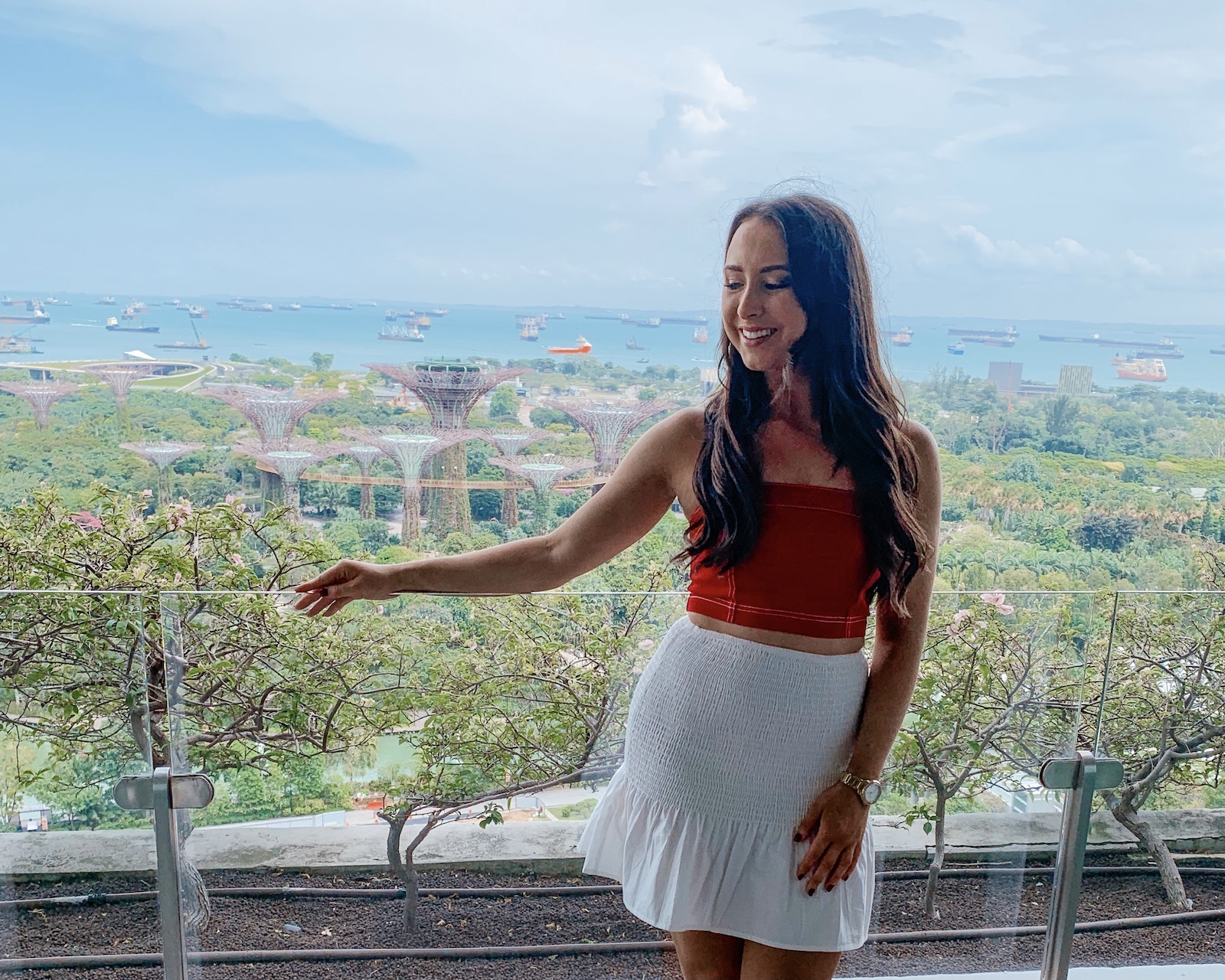 How to Make the Most of a Layover in Singapore

If I ever fell in love with a city after just one visit it has to be Singapore! This was the city we stopped off in before we flew onto Australia. The city was just so beautiful with so much to do and the weather was perfect – not too hot and not too cold. English is one of the four official languages of Singapore and everyone speaks it. All signposts are in English too so it’s a great stopover city on that side of the world, if you want to avoid having a language barrier!

The best advice we got was from the air hostess on the flight. She told us to go straight off the plane to the Jewel shopping mall which is right next to the airport. We were lucky that we landed in the morning around 10am so we went straight there. Depending on your flight make sure you go either when you land or before you take off because it’s a bit out of the way from the city. The Changi airport is also just amazing – probably the best airport I’ve ever been to. It’s massive with so many shops and there was even a Spa where I treated myself to a cheeky massage between layover flights on our way back!

In the Jewel mall there is a HUGE in-door waterfall sometimes called the “Rain Vortex” and it’s the largest indoor waterfall in the world. Honestly, we spent about an hour just looking at it! There are some really great shops and restaurants in the mall too so make sure to check those out. Some of the restaurants even do deals if you have a boarding card. We got a free glass of wine each for showing ours so definitely worth asking! 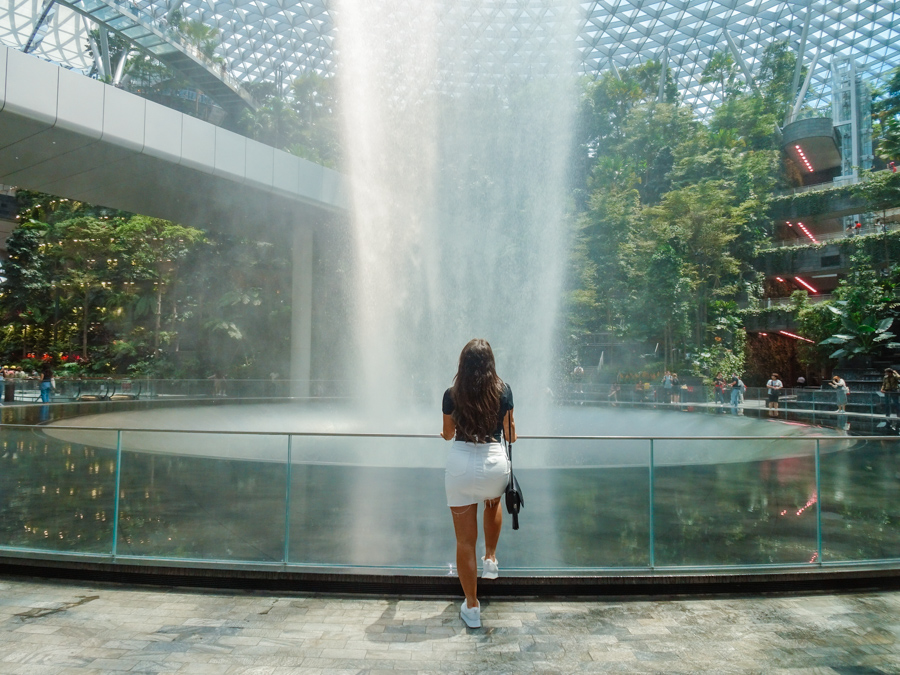 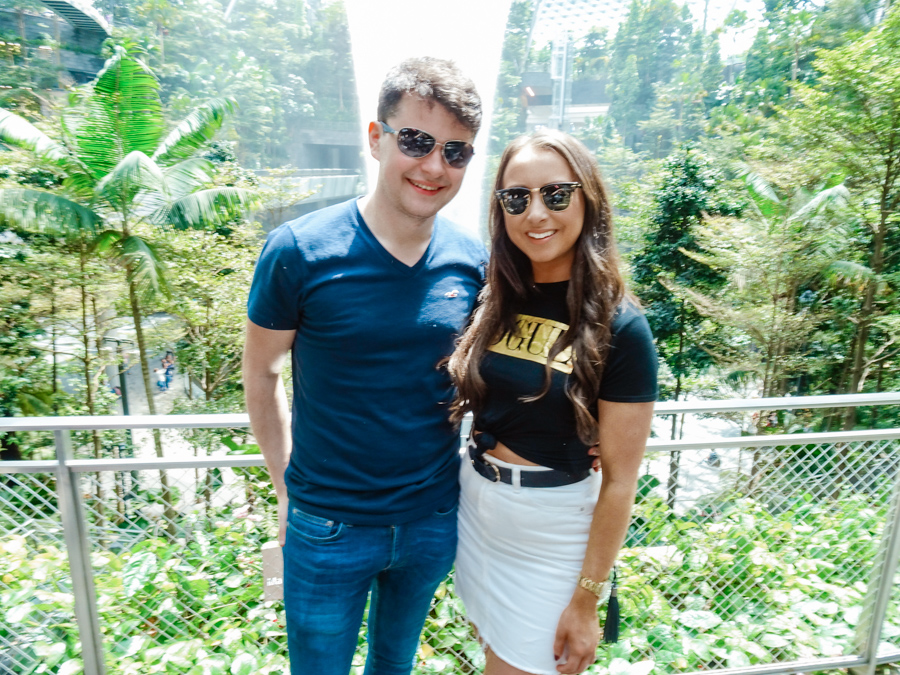 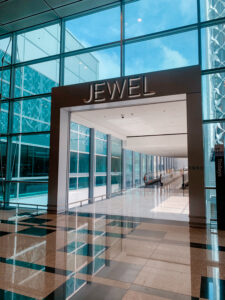 Getting around the city is pretty easy. We mainly used an app called Grab which is a ride-share app equivalent to Uber. We never waited more than a few minutes and the fares were reasonable. We took a taxi one or two times too and didn’t notice much of a difference in price – it was pretty much the same! The currency in Singapore is the Singaporean Dollar and we used Revolut the whole time we were there without any issues! It was just super quick to exchange our money over and pay with card, there was no place that only took cash either! 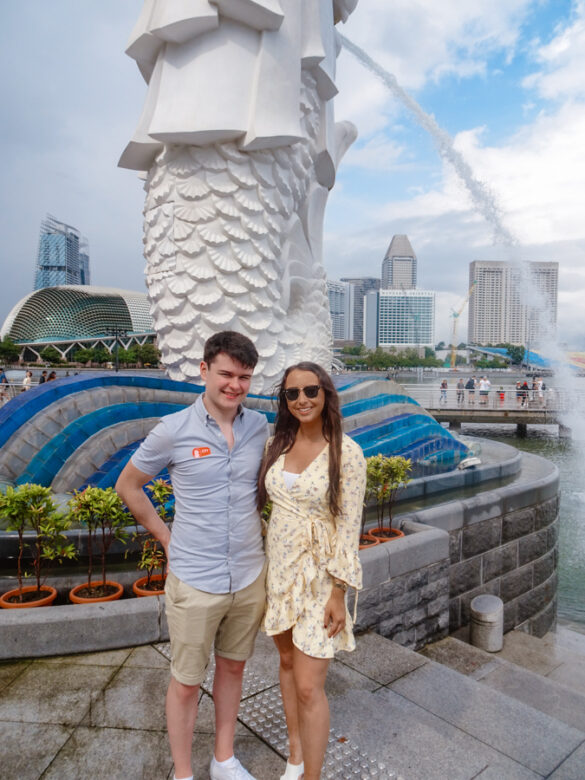 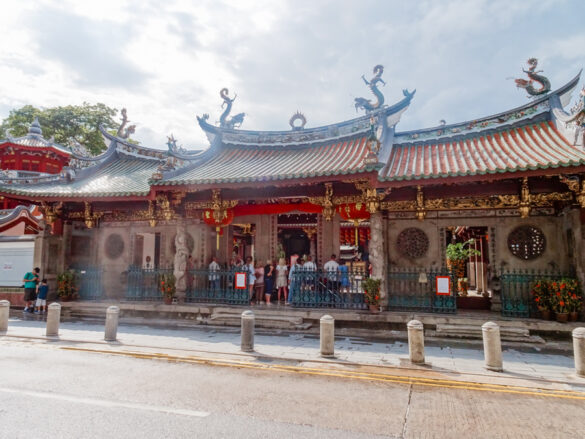 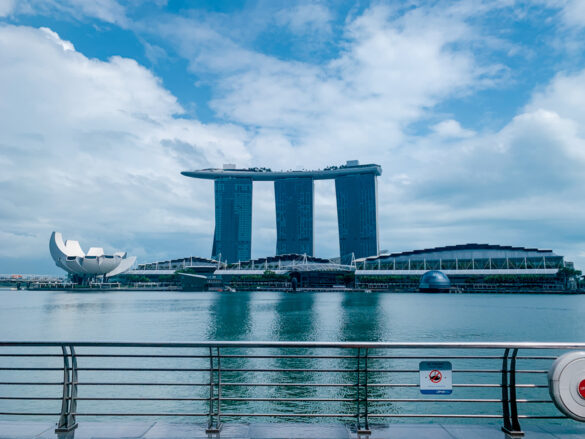 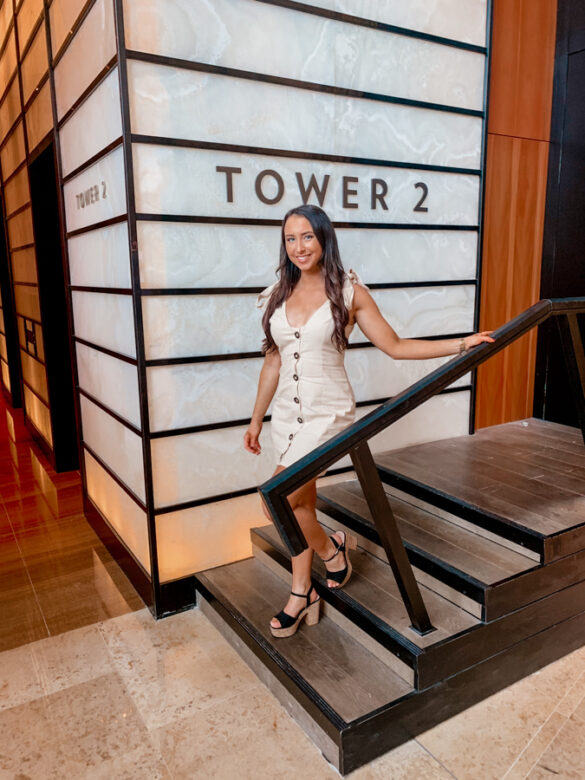 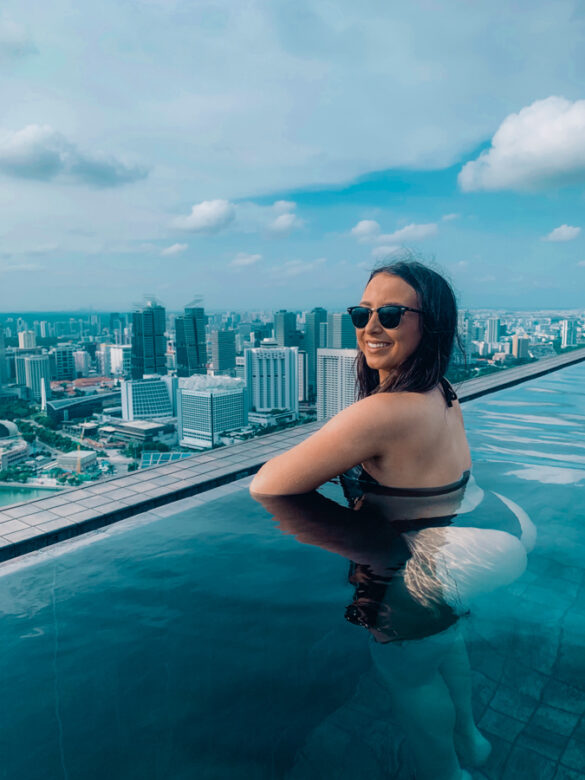 We booked our overall trip with a travel agency called Trailfinders and I highly recommend them! It was my first time booking with a travel agency but it made everything so much less stressful. One of the optional activities they added on to our trip was a ‘walking tour’ of the city. It wasn’t much of a walking tour as we got a bus everywhere but for each stop you got off and walked around to get a better look. This was great as we got to cram everything in since we only had a few days in the city. 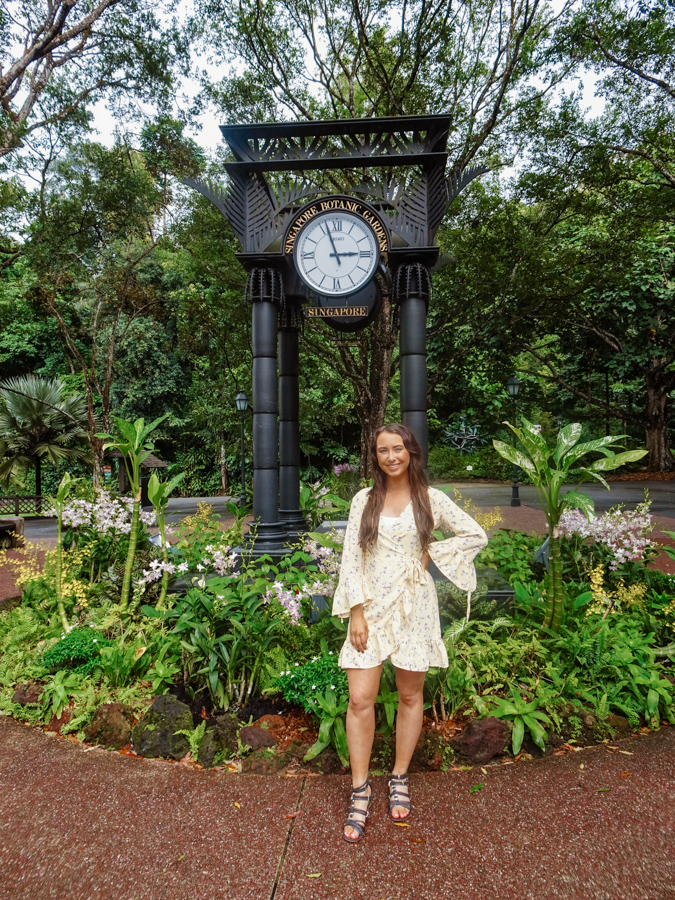 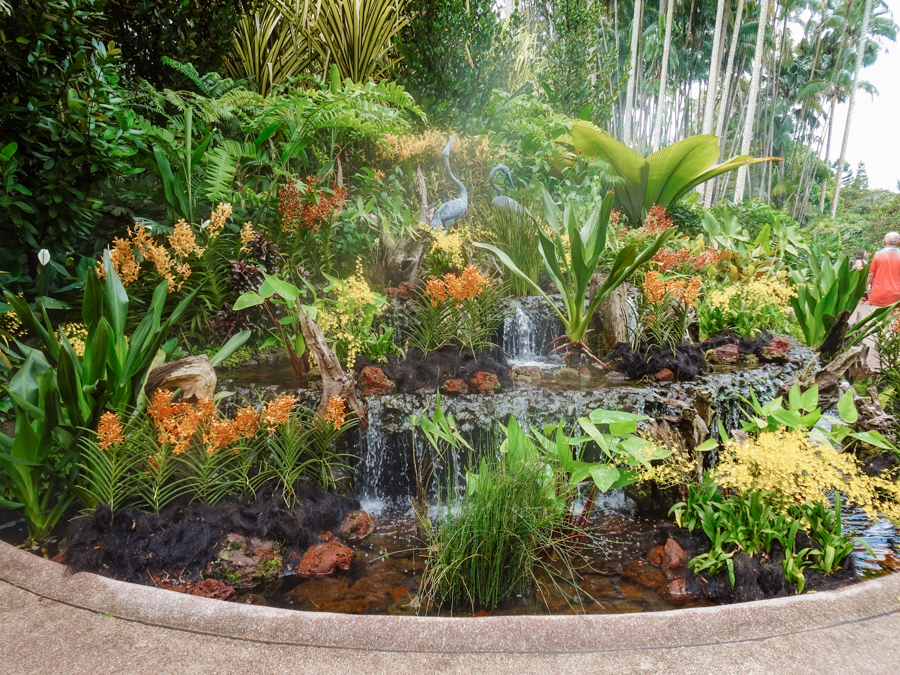 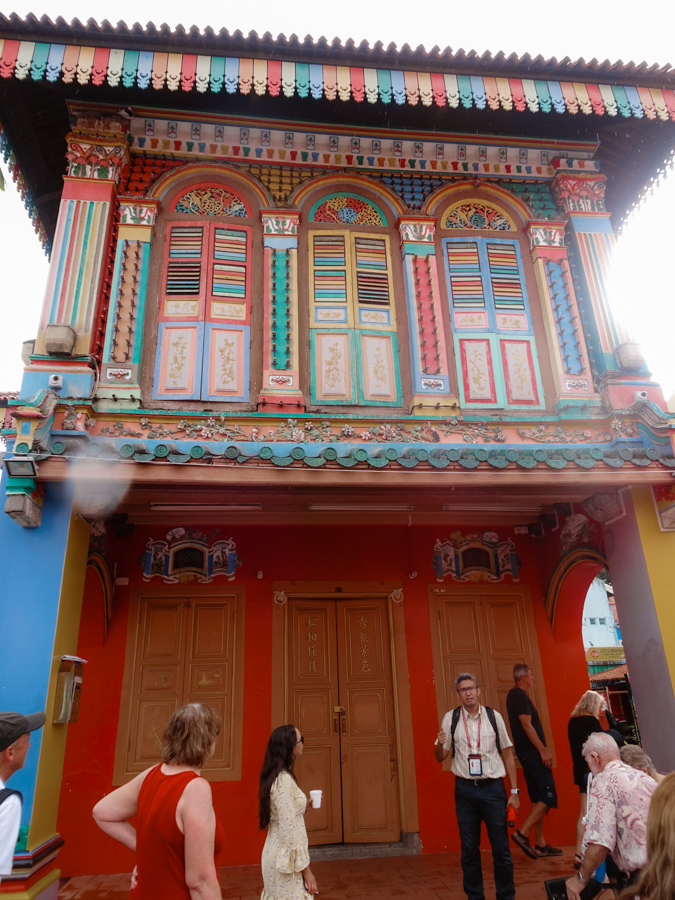 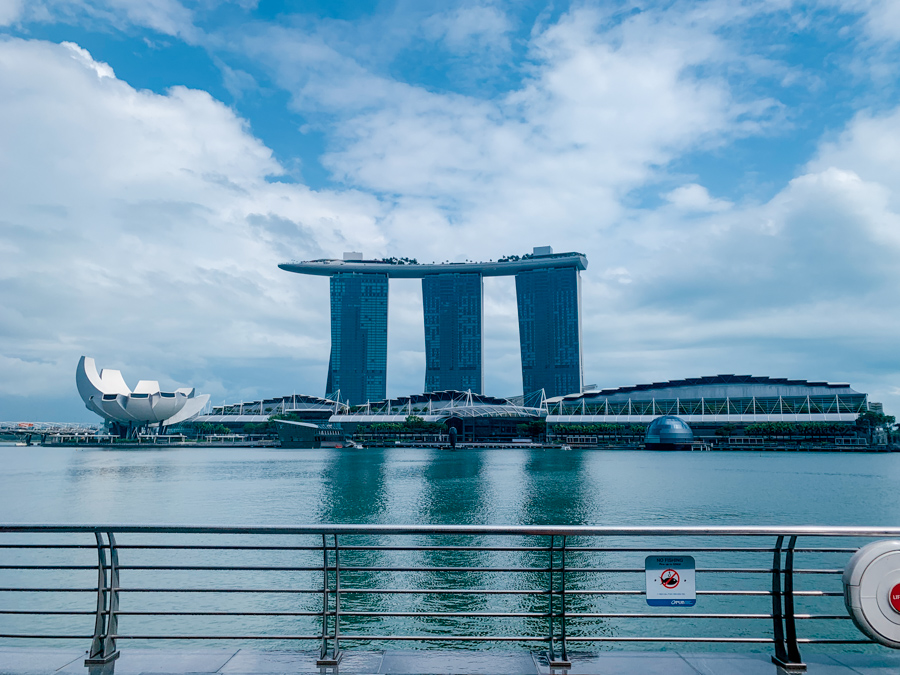 Yes, we did decide to stay one night in the boujee Marina Bay Sands hotel and it did cost us an arm and a leg – but honestly, so worth it! We saved a bit on accommodation as we would be staying with friends in Australia so we could justify spending the extra €€€ here. When we checked in both of our mouths dropped! It was like nothing we had ever seen before and they gave us a complimentary ice-cream when we checked in which was unreal. We stayed in Tower 2 and had a Garden View room which was perfect for the garden firework shows at night. The room was gorgeous and was so massive it felt like a suite!

We only had one day there because our flight was really early the next morning. We did some exploring of the place first and then decided to spend the day on the rooftop pool. The pool is everything you expect it to be and more. The views are incredible and the overall atmosphere is so relaxing. We just got some cocktails (there is lounge service) and enjoyed our time there.

One thing that came included with our stay thanks to Trailfinders was ‘VIP access’ and I had no clue what that meant. After we checked in we soon found out that it was the best thing we could ever ask for – free food and drinks! We went to a room on one of the top floors and got to indulge in an afternoon tea spread at 2PM and then dinner snack and unlimited drinks at 7PM, it was honestly heaven. We watched the garden lights show which was on at 7PM and 8PM for the time of year we were there (February). The show lasted about 15 minutes and we first watched it during our dinner and drinks and again an hour later in our room.

We then checked out the next day to continue on our trip to Australia which you can read about here but we left Singapore knowing we had to come back sooner rather than later! 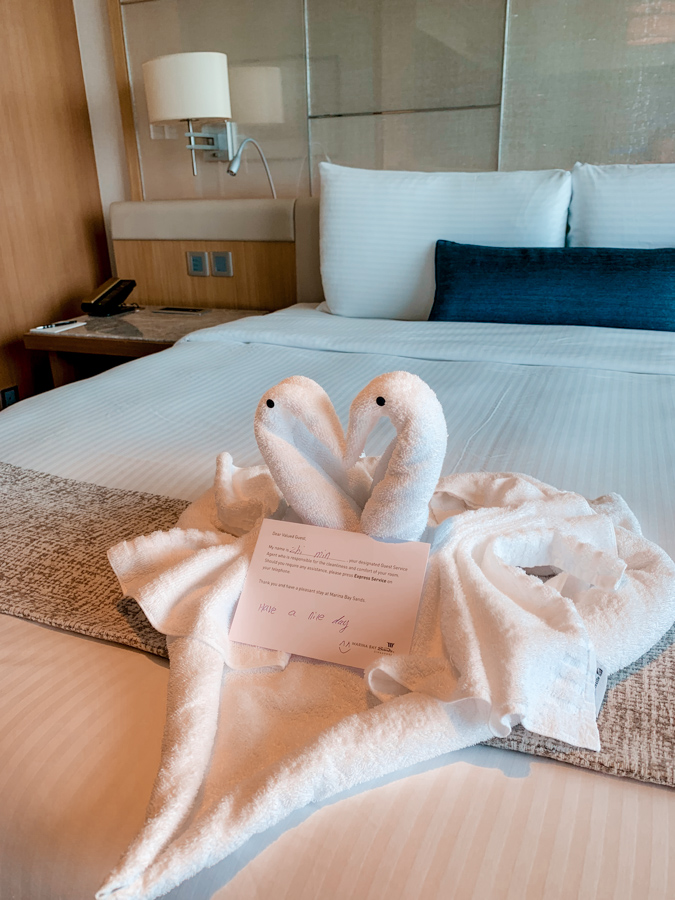 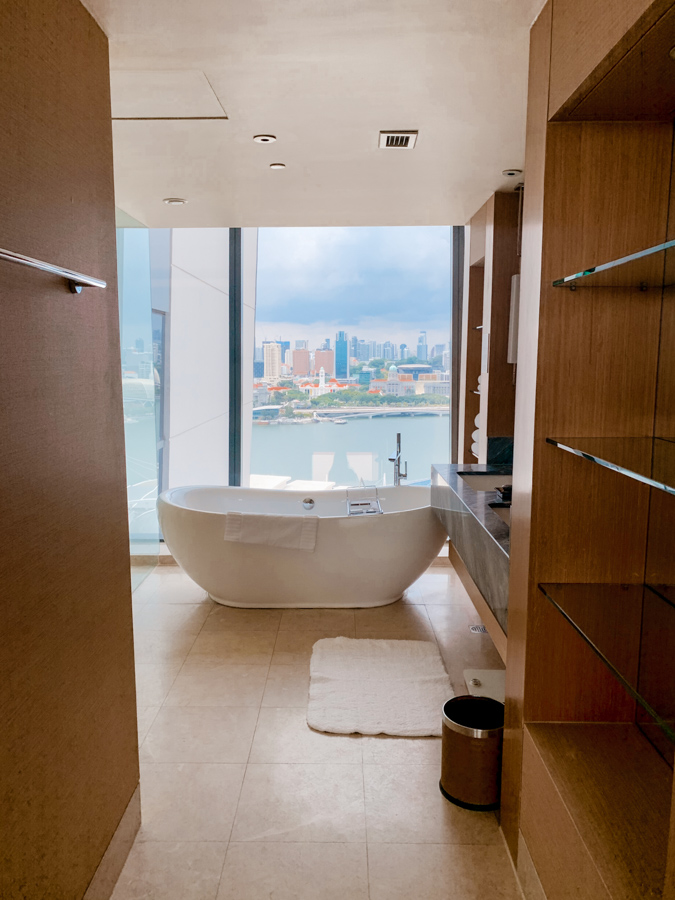 Other Things to Do:

Some of my friends that visited or live in Singapore recommended a few things we didn’t get to do but I still want to share them with you!

Travel Guide for a Couples Getaway to Split, Croatia

Thank you, Maxi. Glad you enjoyed the article! 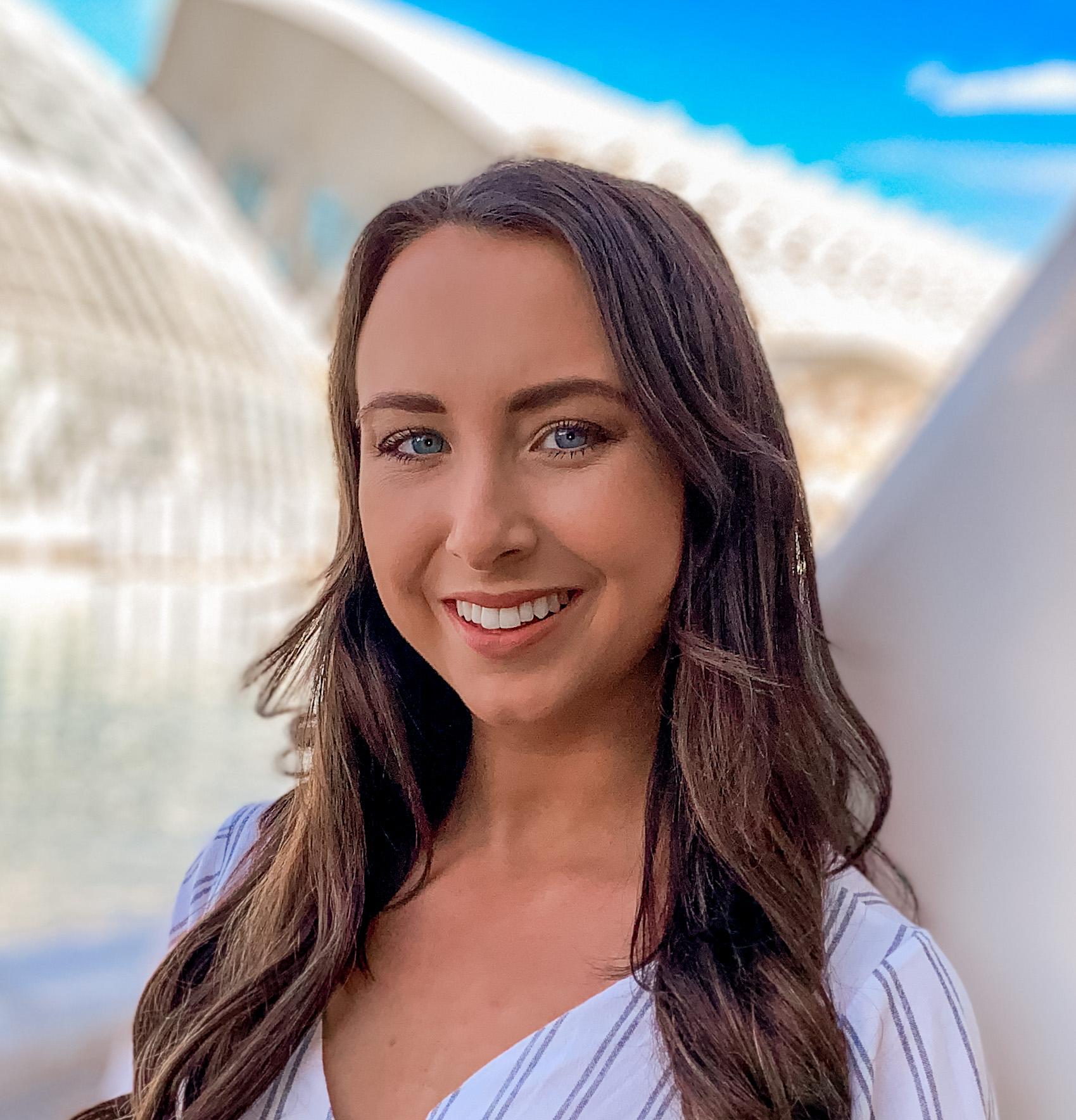 Welcome to my blog where I share my travels stories from the places I have been around the world!

Incredible FREE event in London that you have to s

The Canary Wharf Winter Lights show are here from

Anyone else find themselves doing this? 😅 Foll

Get the latest from me!